Back to blog
Amsterdam Schiphol Airport

Our staff get involved at Amsterdam Schiphol Airport

With a new service starting from Amsterdam to Mauritius, we decided what better way to learn about KLM than a test run from London to Amsterdam and check out what you can do in Amsterdam whilst in transit!

In July, Jamie from KLM, very kindly arranged a hub tour at Schiphol Airport. What an experience! I can see why Amsterdam Schiphol is consistently voted as “Best in Europe”. Together with Ria, Sarah and Penny from Reservations, along with Alina (our flight specialist) and Rupert (our Southern Regional Sales Manager) we met bleary-eyed at 6am at Heathrow Terminal 4. After a breakfast in the sky team lounge and a short 45-minute flight we arrived at Concourse D at Amsterdam Schiphol. Since we were arriving from the UK, we didn’t have any further security checks on arrival which meant we could go straight into the Terminal where Jamie from KLM was ready to greet us for our tour.

As there is only one Terminal at Amsterdam Schiphol, you don’t have any confusion with concourses to navigate which is great for connecting flights. There is an air of calmness in the airport even though it is one of Europe’s busiest. The central part of the Terminal, Schiphol Plaza, has a great selection of shops and dining options. If you have a quick connection, the maximum walking distance between gates is only 20 minutes, but most are less than this. The first thing we noticed is just how clear the signage is and how easy it is to find your way.
There are lots of quirky Dutch inspired décor around, large tulips on tables, bicycles as table legs and giant teacups to sit in. 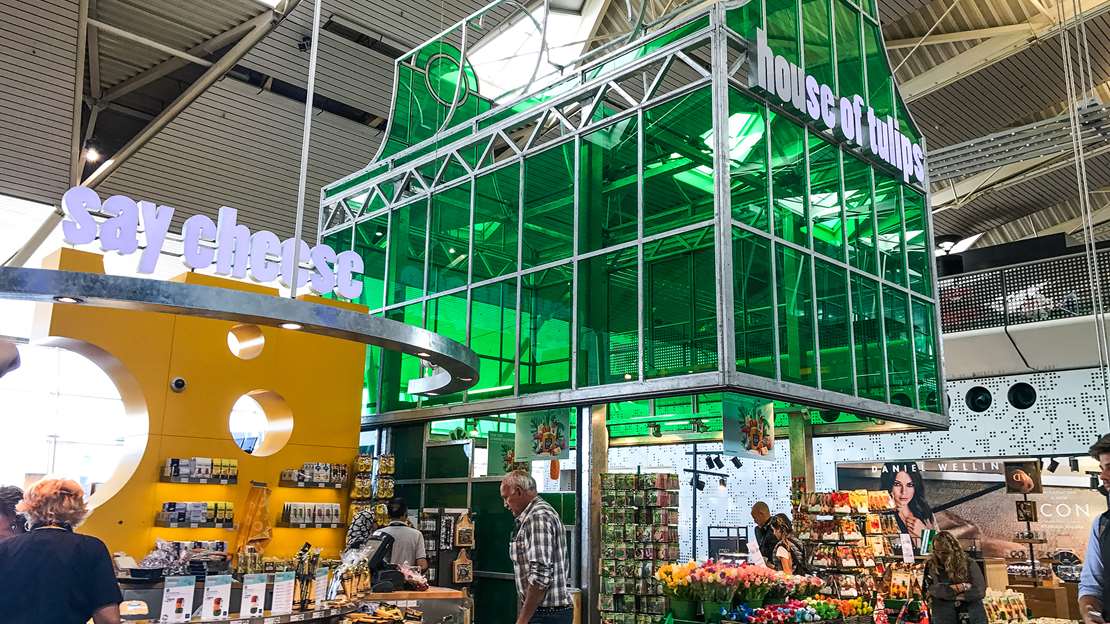 There is a glass floor in the Plaza where you can see the luggage travelling off to the arrivals halls. For families, the upper plaza has a large aircraft play area, great for letting the kids burn some energy. For babies needing an area of quiet and calm, there is a baby care lounge with cots and seating for parents. There are also Terminal hotels air-side which can be booked for a showers and sleep.

Airport Park is the only place after passport controls where you can go outside for some fresh air. There are plenty of comfortable lounge chairs and beanbags where you can relax with a coffee in hand. You can even charge your electronic devices using the special exercise bikes!
Throughout the airport you’ll find many seating areas with plugs for charging your tech, some are quiet with subdued lighting such as the library and others are by the window with views out to the waiting planes and runways. All in all, we managed to fill a 5-hour transit in Amsterdam and really found it to be an enjoyable experience. I wouldn’t hesitate to suggest flying via Amsterdam, even just to collect some Dutch Waffles on the way home!